We had a gorgeous sunny summer day for our Critical Lass ride yesterday. Angel and I met at Bicycle Bottleneck and rode to our our meeting place. Along the way we rode briefly with Coreen, who took a different route so she could go to the bank, and met a new friend (hi Anon!). We took the bike path north to 103rd Avenue, then took that to Churchill Square, and found our meeting place in front of the Winspear: 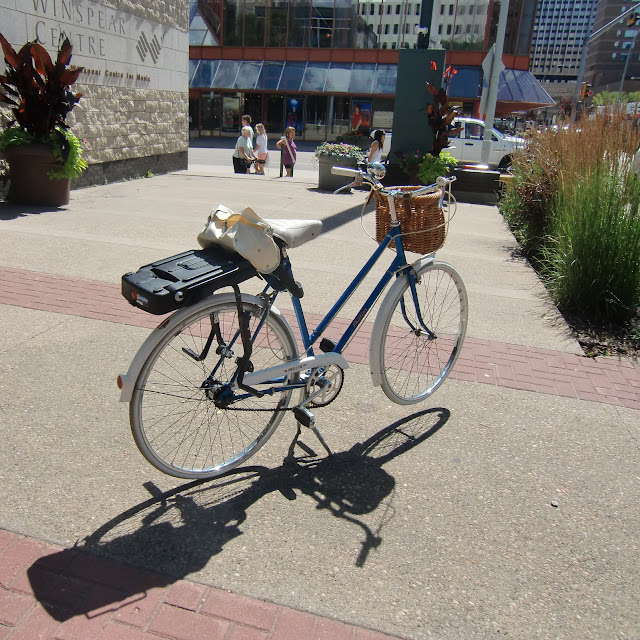 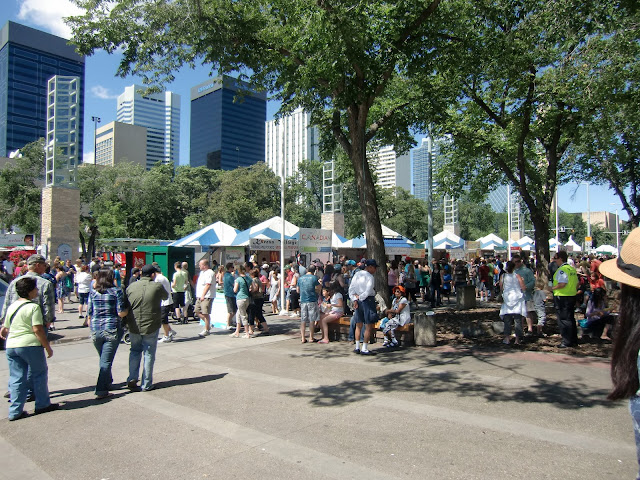 As you can see, the Square was packed for Taste of Edmonton! Poor Coreen wasn't sure where we were meeting, and wasn't able to find us in the crowd. We hope nobody else had the same trouble. =( 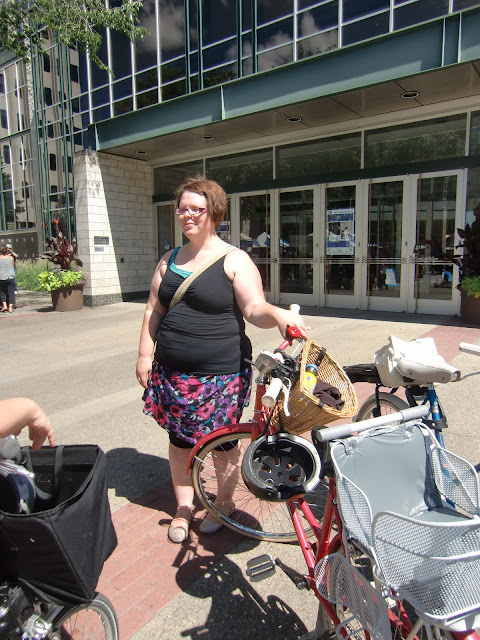 We waited an extra 35 minutes to make sure nobody else was coming, then started on our route: 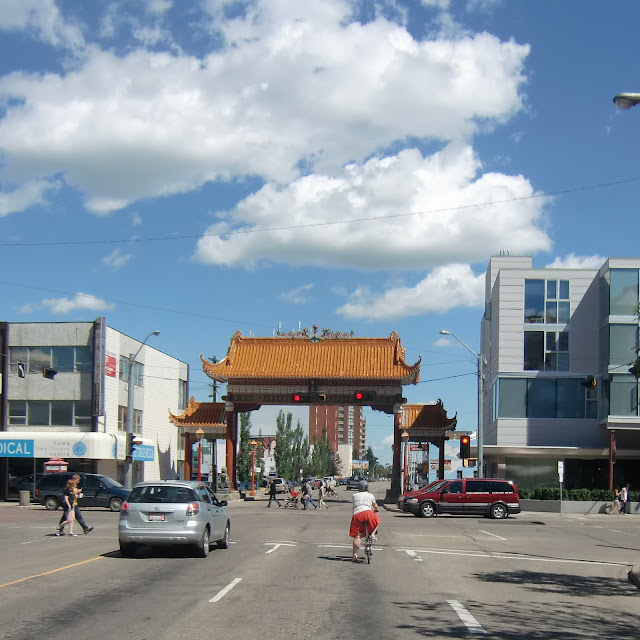 down 102 (Harbin) Avenue through South Chinatown, 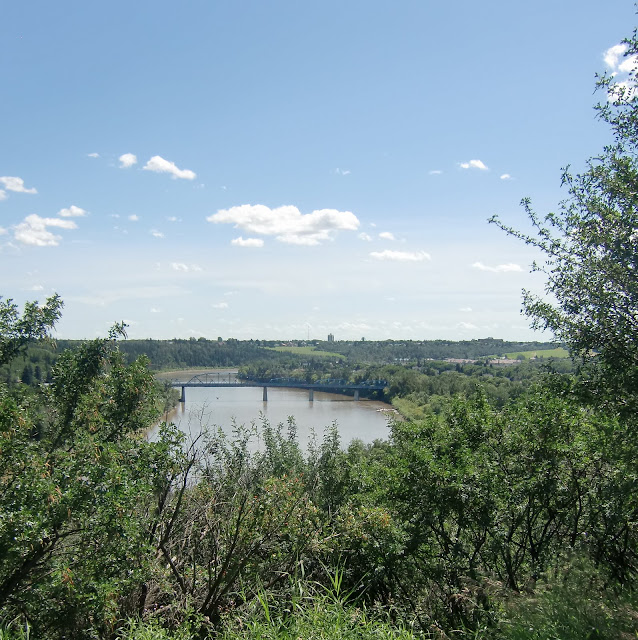 along Jasper Avenue, where we admired the river valley views at the top of Dawson Park (which you need to enter from the bottom of the valley, so we'll explore it another day), 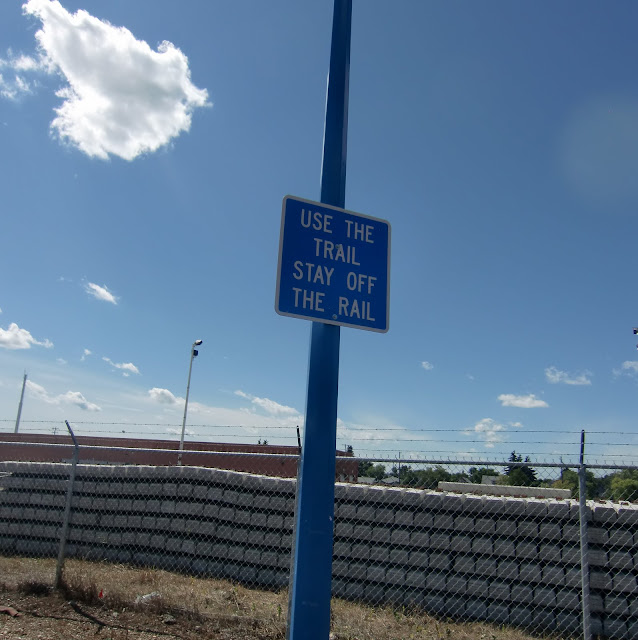 then along the multiuse-trail that runs parallel to the LRT line, 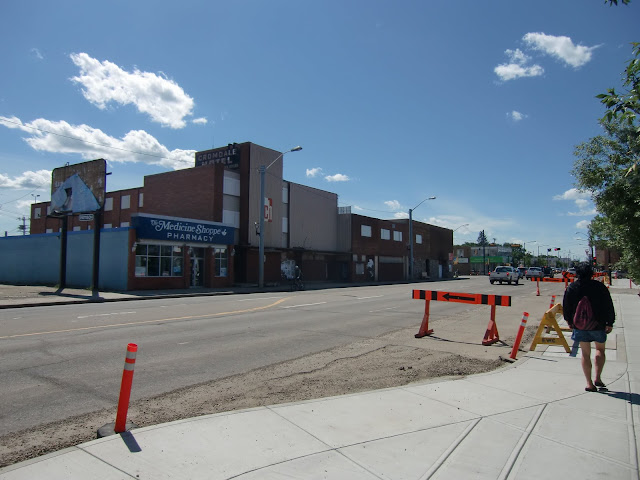 to the end of Alberta Avenue closest to Coliseum LRT Station, which is the most recent section to have infrastructure upgrades. The site of the old Cromdale Hotel (above) gives a good idea what much of the street looked like a decade ago, when it was best known for its drug-fuelled crime rate. We walked a couple of blocks on the brand-new sidewalks, crowded with people walking in the opposite direction toward Capital Ex, and watched pickup trucks and SUVs whizz past, then decided our best course was to ride on quiet, residential 119th Ave, using the church and community league park as our landmarks to come out onto the sidewalks on 118th. In retrospect maybe we should have taken photos of the parks, too - they both had playgrounds full of families, nice green spaces, and at one of them there was a fenced space with a community garden and dogs playing off-leash. So cool. 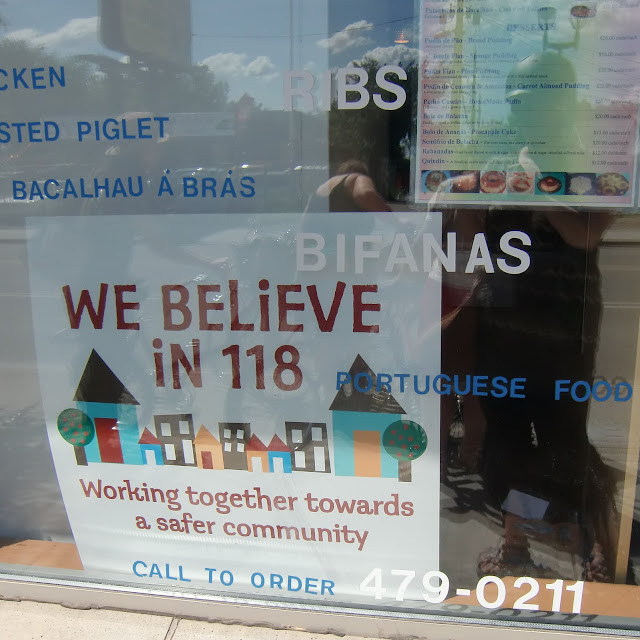 Most of the shops along 118th have this sign in their window, for the community-based campaign to reclaim their neighborhood. (Oh look, this is also a self-portrait.) 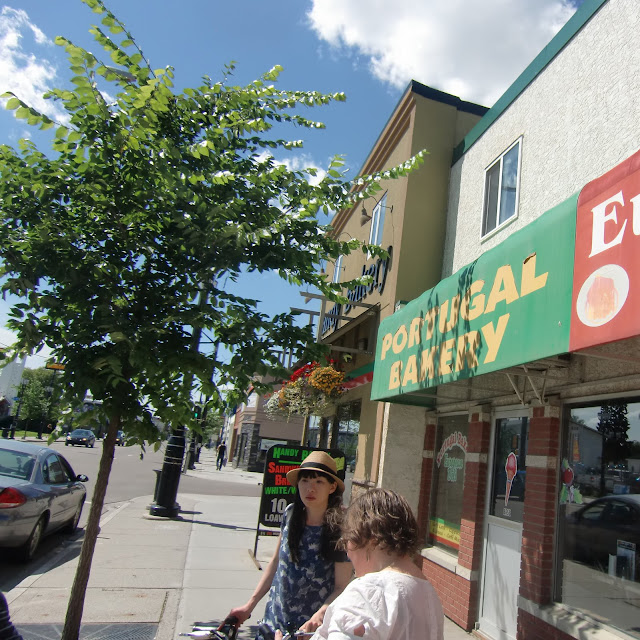 Our first stop was Handy Bakery, famous for their pastries... 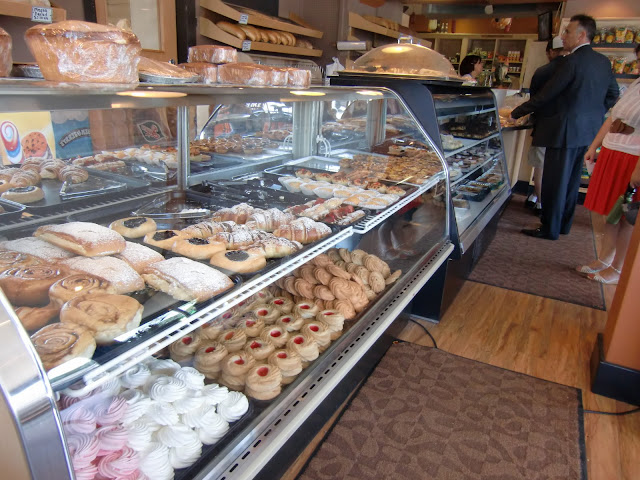 ... and their display case didn't disappoint. They had a steady stream of clients coming in to pick up orders. 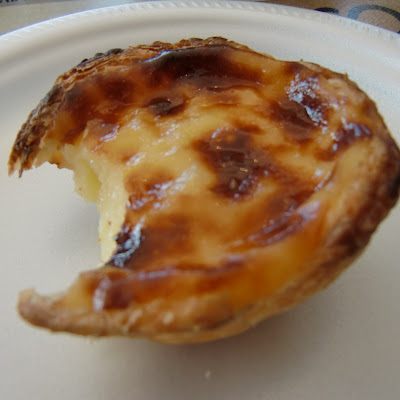 The Portuguese custard tarts? So. so. good. 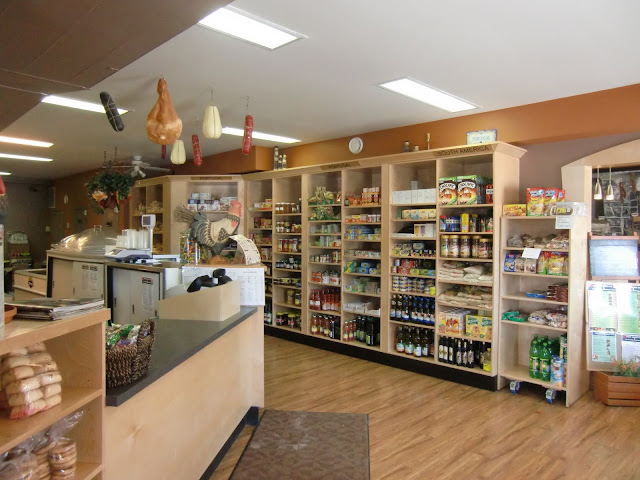 They also have half the shop devoted to hard-to-find groceries and spices. 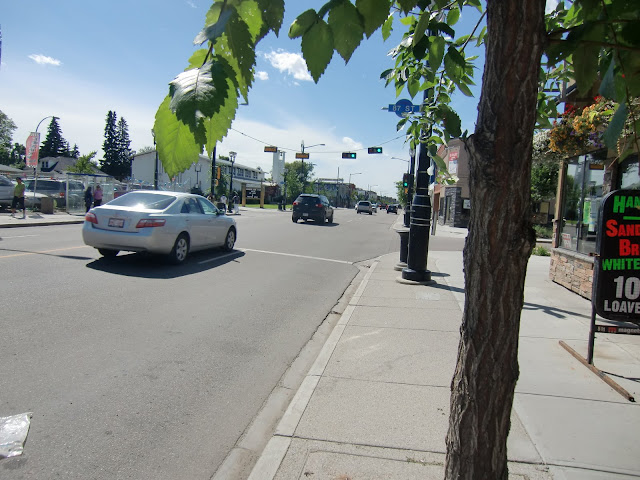 I wonder if the traffic on 118th is always this busy, or if it gets busier during big events like Capital Ex at Northlands? 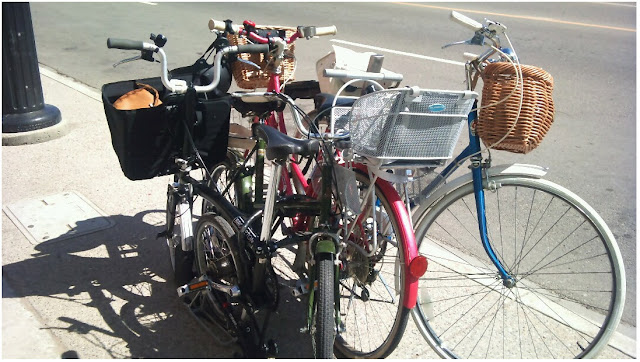 We unlocked our little bike pile from one of the brand-new racks that line the street, then headed back via 119th to our destination, where Coreen caught up with us: 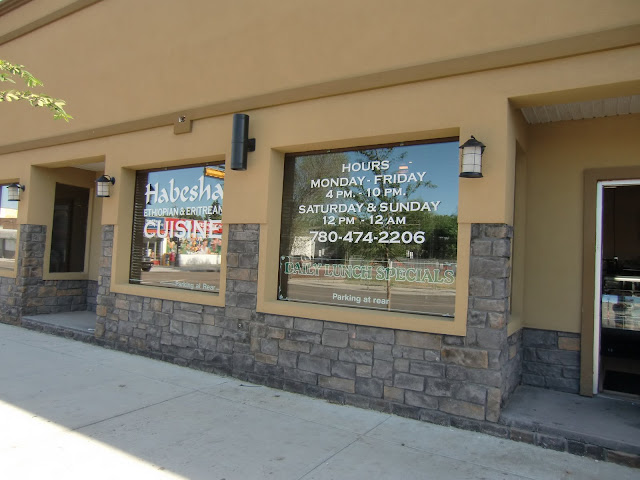 It smelled amazing inside, thanks to the shisha smoke from hookahs, and meals like this: 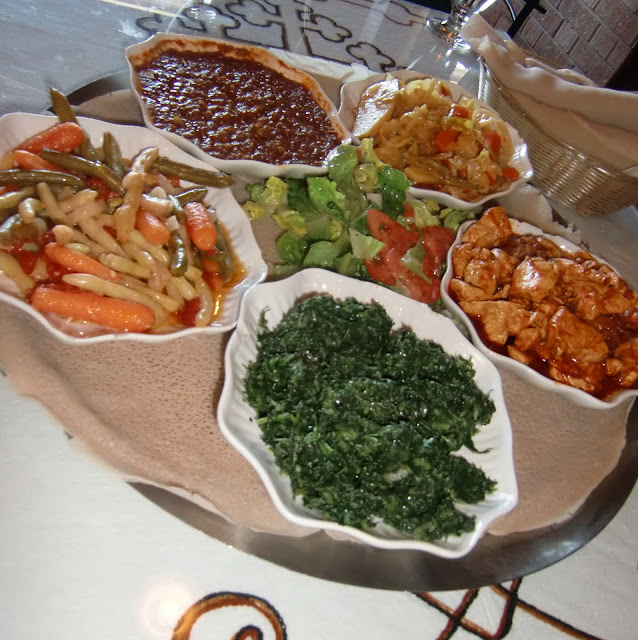 Ethiopian food! So tasty, and extremely filling. The injera (flatbread) that you eat with tastes a bit like sourdough. Nom!

Afterward we rode south on the residential streets marked on the map in the last post, past the Mustard Seed and Hope Mission, and along 106th Avenue parallel to where the railroad tracks used to divide these neighborhoods from downtown. We made one little alteration to our planned route, cutting through Grant MacEwan College and down the future Capital Boulevard: 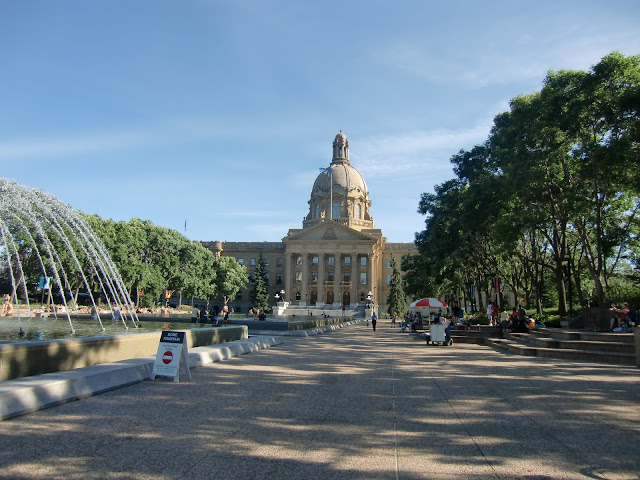 Yeah, the Ledge grounds. After all, it was hot and sunny. How could we resist the chance to go wading? 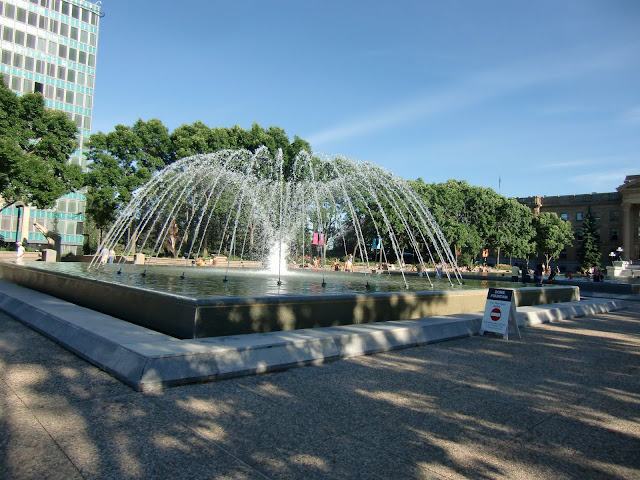 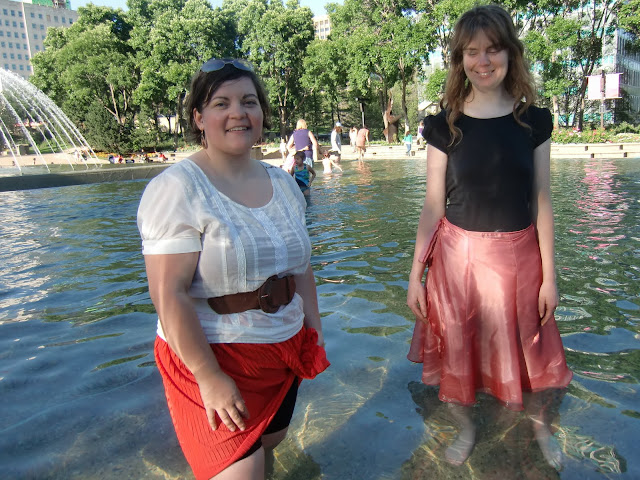 So refreshing, and such a great way to finish the ride! Afterward we headed our separate ways, with most of us heading over the High Level Bridge to Bicycle Bottleneck.
Thanks to everyone who came out! Those of you who missed it - we'll see you August 28th!

27 July Update: I've been reflecting on the changes on Alberta Avenue. It's definitely way less scary to spend a sunny afternoon there than it was in 1994 when I first visited, on a mission with my roommate to find stuff for our student apartment at the world's sketchiest used furniture shops. I remember lots of boarded-up storefronts and pawn shops then, and not a lot of pedestrian traffic. Now we're seeing families in playgrounds, lots of restaurants, lots of people out walking. There's a farmer's market, gallery space, and a number of festivals held on Alberta Avenue now. I expect, now that the infrastructure upgrades are complete, in the next couple of years we'll see it become an incubator of cool local retail and arts space, in the same way that 124th Street and Whyte Ave have been in the past.
I also commented above that the working-class neighborhoods we rode through were divided until fairly recently from downtown by railyards; Marilyn notes in her blog post that the arena project proposed for the redevelopment of that land could make that division permanent. Go read!
PS: This post is part of our series for the LGRAB 2011 Summer Games! It could qualify in several categories - this was a new part of town and took in new-to-us bike paths - but we'll just call it a group ride. Let the games begin!