As you know, people and blogs change over time. Often, bloggers just stop writing and start a new blog as their interests shift; sometimes their blog grows and changes with them instead. We are aiming for the latter.

We've always felt that the best way we could make change with this blog was by just documenting our lives. If I can repack a bottom bracket, anyone can (although you might prefer to get someone else to do it for you). If we can figure out how to live car-light in streetcar suburbs or neighborhoods on the edge of town, with young families, anyone can. Cycling is not just for hipster messenger dudes on fixies, weekend warriors on mountain bike trails or training in pelotons, wierdo commuters on hybrids wearing safety orange and big beards, and willowy fashion models with adorable outfits that match their bikes - it's for everyone. We hope we add to the diversity of bicycle bloggers and demystify living with bicycles.

LFL has outgrown our Blogspot space, literally: we are rapidly running out of room for the photographs that we so enjoy sharing. So, this spring, we are relaunching at loopframelove.com, with a redesigned website using Wordpress that we hope will make it easier to navigate, and we know will give us more room for all the pretties. With a little luck I'll have it all sorted out and the switchover made by the end of the weekend.

We also are going to welcome some new co-bloggers. I have been busy with The Local Good and Sustainable Slow Stylish, Angel's wrist is still healing and she is busy with a new job, and Jen in Seattle has been expending her energy on the greenways initiative instead of documenting it here (stay tuned for news on that). So, we realized that we need to bring in additional collaborators, and when I met Emma I just knew that she would bring wonderful new energy to the blog. (She will introduce herself shortly. She's rad, you're going to love her, and I can't wait to read her posts about her tandem adventures.)

Finally, we are planning monthly Critical Lass rides for 2013, including extending for the first time into the winter months, and our first-ever Kidical Mass (for families). With the goals of growing the awareness and attendance of Critical Lass, I created a Make Something Edmonton profile and a Facebook profile for it this morning (previously we only used twitter and FB event listings, which have limitations). The brand-new Facebook Page will also make it much easier for us to plan and communicate about the event - please go take a look and click 'Like' right now. We will also be making some decsions through discussion there; we're thinking, for clarity of messaging and simplicity of planning, of choosing the same day each month, the same starting point, and possibly the same route (which would reduce the burden of planning and make sure people have way more advance notice). 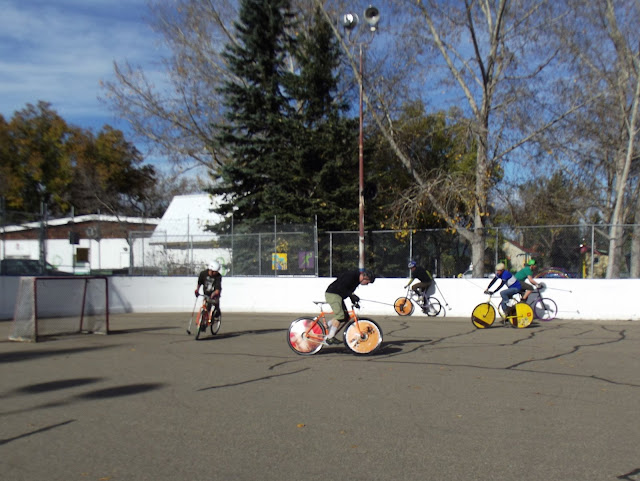 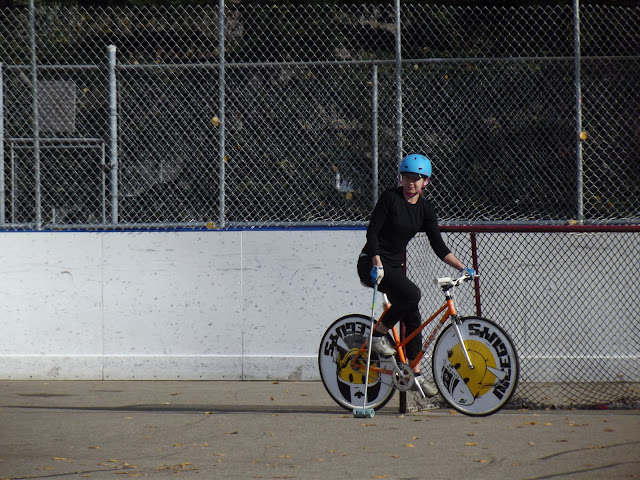 Next we headed on to the Blue Chair Cafe, just a block south of the bike polo tourney,
in time for the menu switchover from brunch to supper.
After a lovely meal and a flurry of text messages,
we headed over to Faculte Saint-Jean, via 76th Avenue and 89th Street. 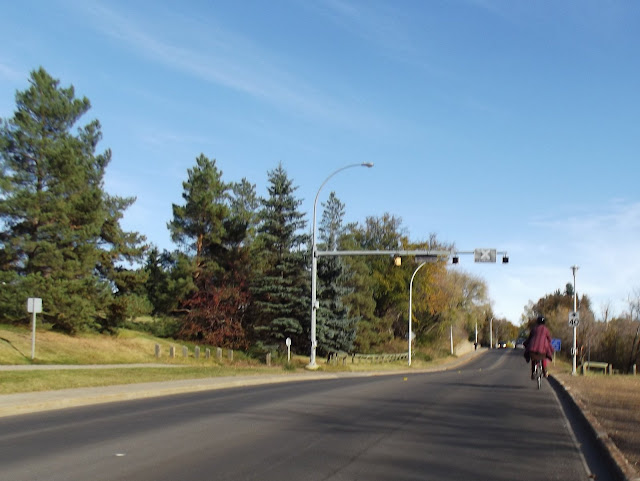 A tale of two street fairs

In May, I went to San Francisco for a business trip. I booked a Sunday morning flight, so that I could have the afternoon free for fun. With great luck, I was able to join Hum of the City and her family to the Mission District Street Fair. We'd only "met" via twitter and blog comments before and it was a delight to meet her in person. Fun fact - we're both in the medical sciences field, but had no idea until we met that day. 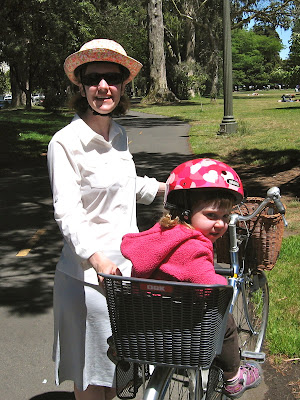 "Hum" rode her honest-to-god Japanese Mamachari, which she's posted on extensively. All I can add is that any bike shop that doesn't think there is a market for ready-made family transportation bikes is in denial. Or doesn't talk to parents. Seriously - every time she takes this bike out, people stop her to ask where they can get one. I want one - and my kid's far too big for it. 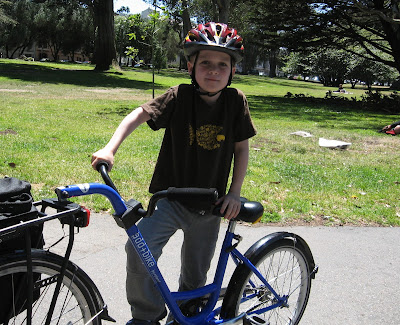 Her husband and son rode this fantastically designed trailer bike. It's attached via a rear rack, making it super stable, just like our Burley Piccolo. However, it attaches at the very back, leaving the top of the rack available for cargo or a rear child seat. In contrast, the Piccolo has a giant knob in the middle of the rack, so the sides can be used for panniers, but a child seat cannot be attached. The downside? It's only available in Germany. I need to start expanding my linkedin network to more international scientists, so that I have access to some of the cool bikes available overseas. 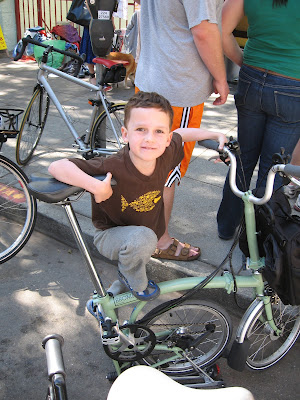 I got to ride the Brompton - see how many cool bikes they have? I found the handling a little weird at first, but quickly got used to it. I've been admiring these baby-wheeled devices for well over a year now. I haven't come up with a convincing rational for why I need to buy one yet, but it's only a matter of time. 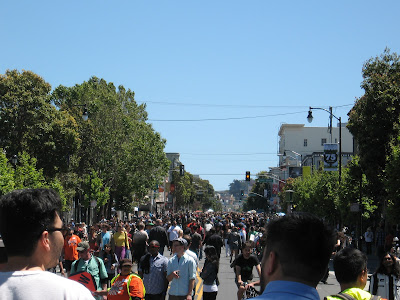 Once we reached the Mission District, the party was in full swing and the streets were filled with people. People walking, people riding bikes - the atmosphere was incredibly mellow and happy. We did need to use our slow-biking skills to weave through the crowd. But hey - at this point we were already at our destination, so what's the hurry? 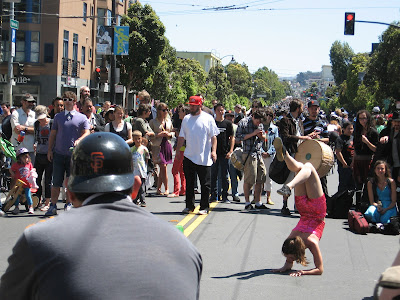 We traveled the whole length of the street fair, stopping to watch performances, including this cabaret/acrobatics group, and the obligatory bathroom & snacks stop. We were very sad when the party ended with a police sweep and a return to normal traffic.

Our route home went along "The Wiggle", which wins for the best named bike route EVAH. The city has recently replaced the original sharrows with the green version above. They're bright and I love them. There is no way you could miss a turn marked with these babies.

Last month, Seattle's Greenwood neighborhood had their street fair. By a terrific coincidence, Hum of the City was here for a visit, staying with Family Ride! The family biking blogosphere can be such a small world some times. This time we were there at the very start of the street fair, which was a strangely gradual affair. "Oh look, they've closed off the street! Let's go, kids! Whoops, there are still cars coming, get back to the side!" Fortunately, it wasn't too long before the streets were really, truly closed to cars and the party began.


I was really happy to see Spencer and Theo have so much fun together. A lot of my Seattle bikey friends have younger kids, so he really enjoyed having a new friend his age.
The streets were full, but not quite as crowded as at the San Francisco Fair. We ran into a number of friends with whom we had to stop and chat. There was bike decorating, a (very) brief kids' parade,  and some fun performances, including a high rise trapeze act.

A Hawaiian dance troupe put on a performance and let the boys try out the poi balls. The difference between poi and nunchuks is thin, particularly to 6 year old boys. Oh well, at least they were wearing helmets. Alway dance in helmets, folks - think of your brains!

After a lot of street partying, we were all getting hungry. There really weren't any street vendors, so we locked our bikes and helmets into an impressive pile and tried to get a table at a nearby restaurant. Alas the wait was long and our party was large, containing many children, so it was not to be. We had to say our goodbyes and get home before dark. It was so much fun to be out and having fun in the street and meeting friends, new and old!
Posted by antijen at 9/16/2012 12:16:00 AM No comments:

We had a gorgeous day for a ride yesterday, 20-ish and sunny with a crisp breeze.
Unfortunately great weather and short notice meant not many people came out. Oh well, their loss!


Our destination was the two-block shopping district in Highlands (112 Ave & 65th Street), an early 20th-century streetcar suburb with fantastic Arts-and-Crafts architecture and mature trees. We met Sarah and her beautiful daughter at Mandolin Books & Coffee, grabbed iced coffees and sweets (the date squares and the chocolate cookies are delish), and walked a couple of blocks to the neighborhood playground. When we got a text from Judy, we headed back, said bye to Sarah and her sweetie, then spent a happy hour browsing used books, locally-made clothing, gorgeous yarns, furniture, and flowers.